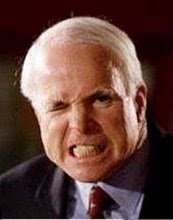 On October 13, 1999, during John McCain's first run for the presidency, the Washington Post said,

Sen. John McCain is facing questions about what some Arizona political leaders view as his quick temper – and whether it might hinder him as president.

In a front page article and separate editorial Sunday, The Arizona Republic said it wanted the nation to know about the "volcanic" temper McCain has unleashed on several top state officials.

Those who have been on the receiving end of a McCain uproar include Republican Gov. Jane Hull, former Republican Gov. Rose Mofford and former Democratic Mayor Paul Johnson of Phoenix.

Mrs. Hull, a supporter of GOP presidential front-runner George W. Bush, has acknowledged that her relationship with McCain has been cool and told an interviewer recently McCain "has to keep control" of his temper. WaPost

"If McCain is truly a serious contender for the presidency, it is time the rest of the nation learned about the John McCain we know in Arizona. There is also reason to seriously question whether he has the temperament, and the political approach and skills, we want in the next president of the United States." WaPost

John McCain snaps at female journalist on campaign plane.
At least he doesn't call her a c**nt this time.

McCain's furious temper anger and quick temper are a lifelong character flaw, according to Newsweek: "As an angry toddler, he would hold his breath until he passed out (his parents' cure was to drop him fully clothed into a bathtub of icy water)." Newsweek

A shocking anecdote from a biography of McCain, reported in the Editor at Large blog as well as elsewhere, really is something that McCain should either confirm or deny: "an excerpt from the upcoming book "The Real McCain," by John Schecter, reveals that McCain is more than just an ill-tempered ogre:"

Three reporters from Arizona, on the condition of anonymity, also let me in on another incident involving McCain's intemperateness. In his 1992 Senate bid, McCain was joined on the campaign trail by his wife, Cindy, as well as campaign aide Doug Cole and consultant Wes Gullett. At one point, Cindy playfully twirled McCain's hair and said, 'You're getting a little thin up there.' McCain's face reddened, and he responded, 'At least I don't plaster on the makeup like a trollop, you cunt.' McCain's excuse was that it had been a long day. If elected president of the United States, McCain would have many long days.

"If McCain is elected president, we will all have many long days," says the Editor at Large blog.

Perhaps the most remarkable story of McCain's temper involved Arizona Congressman Rick Renzi. Two former reporters covering McCain, one who witnessed the following events and one who confirmed the facts provided by the first, relayed it to me as follows:

In 2006, the Arizona Republican congressional delegation had a strategy meeting. McCain repeatedly addressed two new members, congressmen Trent Franks and Rick Renzi, as 'boy.' Finally, Renzi, a former college linebacker, rose from his chair and said to McCain, "You call me that one more time and I'll kick your old ass." McCain lunged at Renzi, punches were thrown, and the two had to be physically separated. Huffington Post

Watch the video here of McCain denying this fight ever took place at all. I have come to the conclusion, based on this video and others, that you can tell when John McCain is lying (or trying desperately to control his explosive temper) because his voice becomes very impassive, even-toned, he smiles weakly, and seems to be making an immense effort to sound reasonable.

His temper lurks—controlled, but sometimes barely. I asked about a report that McCain's handlers need to caution him against blowing up during presidential debates. "No," he said. "They told me to appear presidential." McCain flashes a smile from time to time that is more like a smirk, "a defense mechanism—to smile, not appear angry or frustrated," he acknowledges. Newsweek

The uninitiated my actually be taken in by this, if they don't look out for the signs.

This incident reminds me of the interview a few weeks ago that Obama did with liberal radio host Ed Schultz.

Thanks for the link. Great blog!