How Many Homes Does John McCain Really Own? 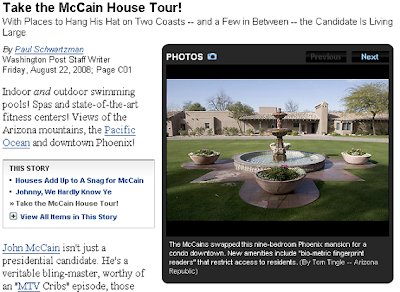 John McCain really stepped in the McShit when he acknowledged in a Politico.Com interview that he doesn't know how many homes he owns.

A week dominated by vice presidential speculation and the run-up to the Democratic National Convention was quickly overtaken by the McCain miscue. In an interview with Politico.com, the presumptive Republican nominee was asked how many houses he and his wife, Cindy, heir to a beer distributorship, owned.

Obama's campaign and the Democratic National Committee pounced with remarkable speed. By mid-morning, reporters had received a video log featuring Cindy McCain's childhood estate in Phoenix, an Architectural Digest spread on another property the McCains had owned previously, and tax records and photos detailing seven houses and condominiums -- in Coronado and La Jolla, Calif.; Phoenix and Sedona, Ariz.; and Arlington. By 11 a.m., the Obama campaign had produced a television advertisement titled "Seven" and was answering the question McCain could not. Washington Post

Well, John McCain's white, so to many people his "I'm one of you" chatter will sound relatively authentic no matter how rich he is and how many houses he owns. But, economically I know John McCain is nothing like me because (a) I know how many houses I own, and (b) I don't own anywhere near seven houses. And none of my houses have been featured in Architectural Digest.
Posted by Francis Holland at 2:27 PM