Why Did Sen. McCain Call His Wife "Cunt" in Public? 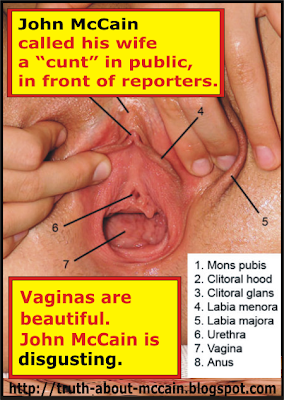 The graphic artist is also editor of the Francis L. Holland Blog.

I apologize in advance for this graphic image of female anatomy, but I just can't think of another way of dramatizing the shock I feel that John McCain called his wife a "cunt" in public, in front of reporters. So, here's a photo of the reference McCain made to his wife in front of reporters. I hope this will spark a discussion of whether a man who says things like this should be president of the United States.

Of course, employers are ecstatic with this ruling. If they can just hide from women the fact that they are being underpaid until the filing deadline on their claim expires, then they can continue to underpay these women for the rest of their lives!

John McCain needs to be run off the campaign, but in the meantime, he needs a running mate who can clean up his verbal diarrhea like this incident.

I apologize in advance for this graphic image of female anatomy, but I just can't think of another way of dramatizing the shock I feel that John McCain called his wife a "cunt" in public, in front of reporters.

Seriously, though, dude: wtf? Who is your intended audience here, and what is it you're trying to communicate? Serious question.

BelleDamme 22, I am very much against vulgarity, and you'll find that I virtually never swear at my twenty or so blogs.

However, I am infuriated that John McCain called his wife that word, in public and in front of reporters, and nonetheless runs for president as an advocate of family members.

The national media has yet to ask John McCain to confirm or deny what he called his wife, although there is a video on this site where he refuses to deny it.

I hope that by posting this shocking graphic I can help to push this question into the national conversation: "What kind of man calls his wife this name in public, in front of reporters?"

If my readers believe that the harm done by the photograph is outweighs the harm done when the nation remains ignorant of who and what John McCain really is, then I would probably remove this photograph, because my intention is to inform and motivate my readers rather than to deeply offend them.

My hope is to cause the sort of stir that John Maplethorp did with his photographs, but with the outcome being that Americans become generally aware of the foul and vile name that John McCain called his wife in public.

As shocking as this photograph is, if that occurs then it will have achieved it purpose and we all will be better off for it.

Believe me, if I don't call him this now, then we all will be calling him this in a year, when American young men and women are dying by the scores in Iran, not to mention the hundreds of thousands of Iranians who would die in the first-strike nuclear attacks that many John McCain advisers and supporters seem to believe is a good idea.